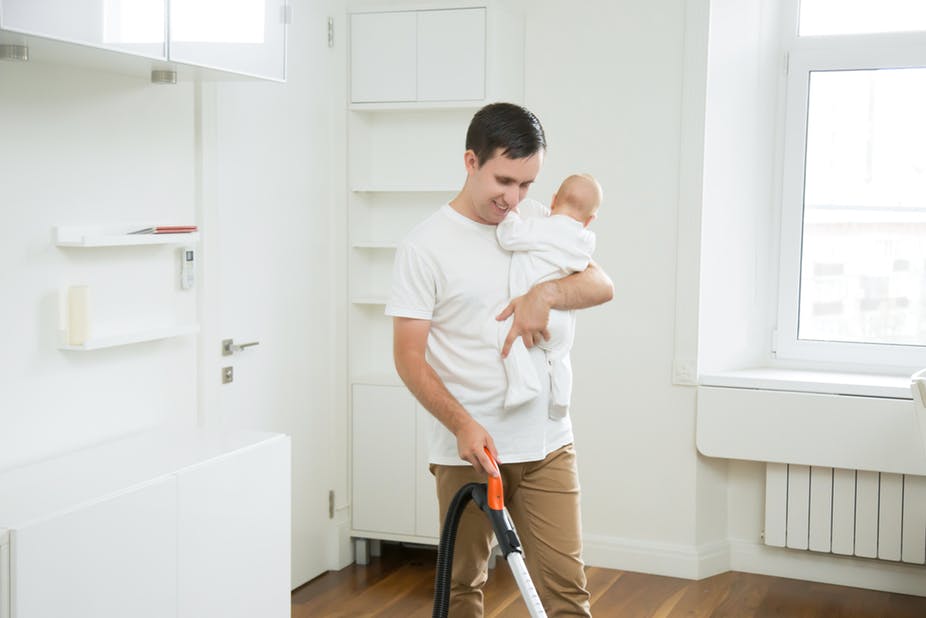 Forget the red roses and teddy bears this Valentine’s Day – the best way for men to shore up their relationships is to run the vacuum over.

Recent research backs this up. A Swedish study found heterosexual couples were more likely to divorce if men discounted women’s housework contributions. Also, women who did more housework than their partners were overall less satisfied with their relationships, and more likely to consider breaking up.

For many couples, housework is often a site of negotiation. On average, women perform more housework than men in all countries, including Australia.

For decades, sociologists have been intrigued by the persistent gendered division of housework, because women’s greater time spent on housework is often at the expense of their time in employment and leisure. Women’s greater housework share, even when earning more money or working longer hours, is pointed to as an illustration of patriarchy and lingering homemaker/breadwinner gender roles rooted in the Victorian era.

Even in a socially progressive country like Sweden, women spend more time on housework, on average, than men. While many studies have documented these differences across groups and countries, fewer studies investigate the consequences of housework inequality.

So the question has to be asked: does housework inequality ruin relationships?

Existing housework research shows this is true. But what we didn’t know is how men discounting women’s housework contributions deteriorates relationships.

By following these couples over time and linking them to the Swedish register data (collected by the government for births, deaths, marriage, divorce and so on), we found these couples are more likely to officially dissolve the relationship. So in Sweden, at least, housework inequality is cause for divorce.

Research in Australia shows that women spend more time doing housework than women in other countries. They receive less childcare and employment support from the federal government. Australians are also more traditional in their gender role expectations when children are born, which increases the housework load for women.

The intensity of domestic work without strong government support schemes, which are shown to equalise housework (such as paid parental leave or publicly provided childcare), may make Australian couples especially vulnerable to the negative consequences of housework inequality. This may in turn contribute to Australia’s relatively high divorce rate.

Looking for a cause of hope? We found that if men credit women’s housework – or he reports she does more but she says they share equally – women report better relationship satisfaction.

This finding supports Arlie Hocschild’s idea that couples negotiate domestic work across economies of gratitude. In her book The Second Shift, Hochschild identifies that expressing gratitude for a partner’s housework, no matter if a man or woman, creates an emotional surplus that buffers couples from the negative emotional outcomes.

If one partner continuously recognises the other’s housework, childcare or emotional labour, the other is more satisfied with the relationship. By contrast, failing to recognise what the other has done creates a void, contributing to a negative interpersonal climate.

So is the answer to housework inequality to just praise the other’s excellent mopping? If we are to draw any lessons from our Swedish brothers and sisters it is this: men, on this Valentine’s Day, ditch the flowers and chocolate and pick up the mop and sponge. Our research suggests that will go a lot further in your quest for long-term relationship quality.

This article was originally published (under a different title) at The Conversation.

Leah Ruppanner is a Sociologist at the University of Melbourne.

Adventitious collaboration: On the value of blended research