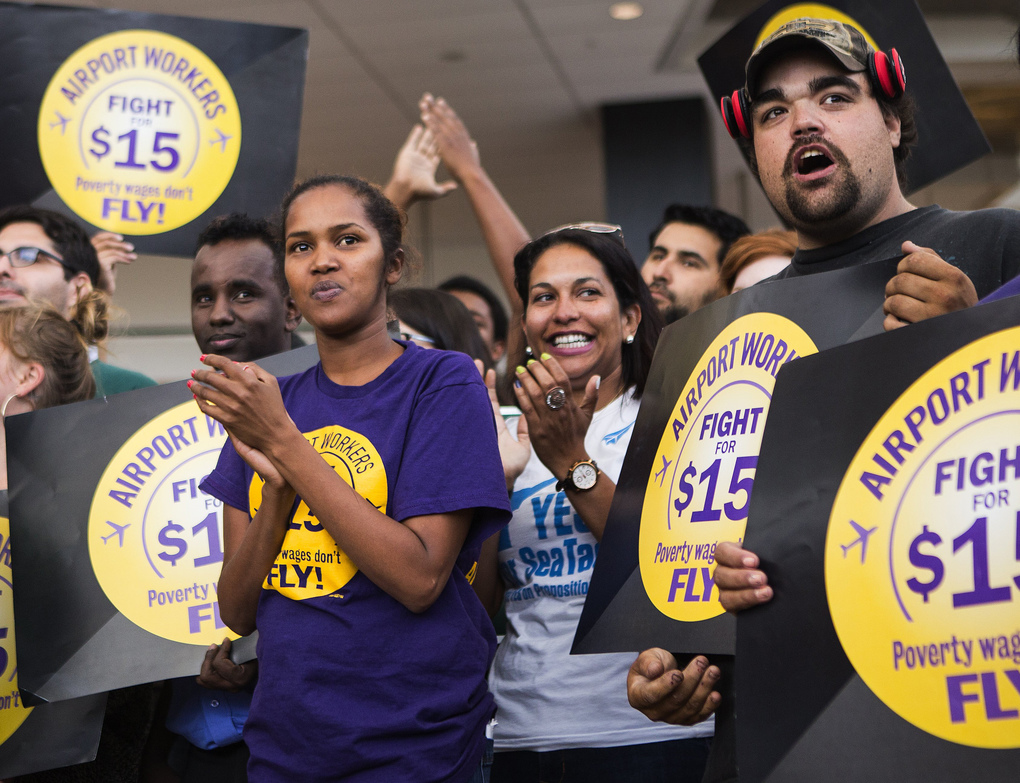 Workers and supporters celebrate a $15 minimum wage at Sea-Tac Airport.

Labor Studies Journal recently published a debate on the Fight for $15 labor movement. We are delighted to host a virtual panel including short summaries of the debate by each of the authors, all of whom are leading labor scholars and activists.

Steven Ashby praises The Fight for $15 as “one of the most vital, innovative, and militant struggles in recent US labor history.” He notes that the movement has “created the pressure to win 19 million low-wage workers a total of $61 billion in annual raises through state and local legislation raising the minimum wage, and employers pressured to raise their minimum pay.”

Ashby concludes that the American labor movement must build on the momentum of the Fight for $15 and coalesce around a movement to organize low-wage workers nationwide.

Jonathan Rosenblum points out that although the Fight for $15 movement has been successful in winning pay increases for more than 19 million low-wage workers, in the years since SEIU leaders launched the Fight for a Fair Economy, private sector union density has continued to decline – down from 7% to 6.5%.

Rosenblum asks whether the Fight for $15 movement can channel the energy of the walkouts into the construction of a more durable organizational basis for increased workers’ power.

Tom Juravich agrees that the Fight for $15 has been successful – both in increasing wages and in changing how Americans think about low-wage work. But its gains have largely been in the form of symbolic power. He questions whether the movement can expand beyond the “low-hanging fruit on both coasts?”

Juravich concludes that for the movement to succeed, it needs to find a way to move beyond symbolic power and gain “real structural (economic) leverage,” perhaps by focusing resources on organizing a specific “union city” rather than running “low level campaigns across the country.”