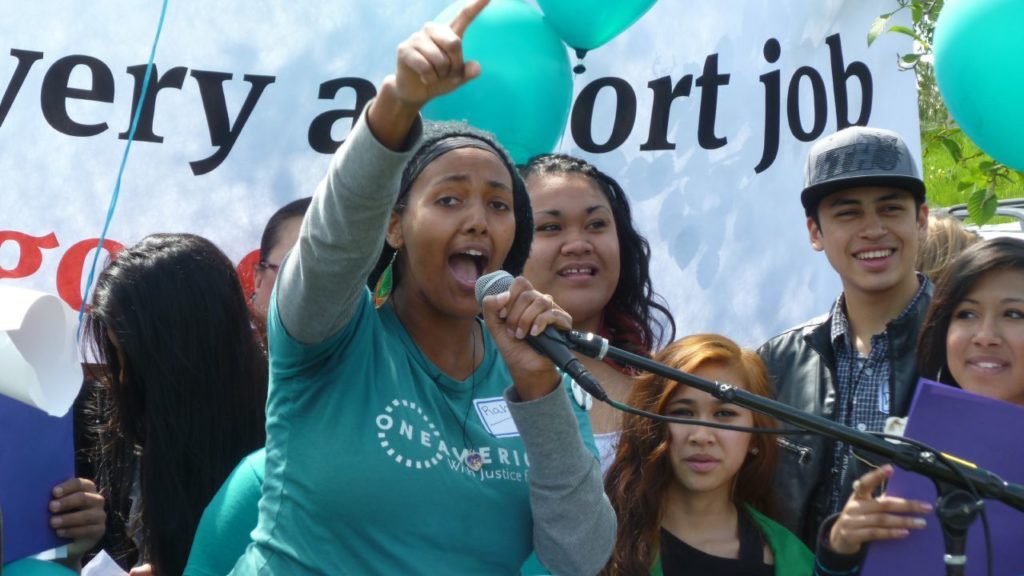 Hit “pause” for a moment on the latest Trump outrage and recall the political landscape following the Wall Street-induced train wreck of nine years ago. The Obama administration bailed out the financiers, businesses fired 8.7 million workers, banks foreclosed on more than 14 million homeowners, and unions lost 1 million members.

Labor law reform died in spite of Democratic congressional supermajorities. The Affordable Care Act, stripped of universal coverage and the public option, barely limped across the finish line. Democrats lost control of the political narrative and got crushed in the November 2010 elections.

One in every six American workers was seeking work, Wisconsin Governor Scott Walker launched his union-busting plan, and an ascendant Tea Party–driven national discourse – setting the stage for today’s mess – blamed the economic crisis not on corporate greed but on the federal government, immigrants, and unions.

Amid this deepening crisis, in early 2011 the leadership of SEIU, the union I worked for at the time, experienced an organizational epiphany. To stop the slide into irrelevancy, SEIU swung the union’s resources into a massive, $60 million grassroots campaign in 17 cities, deploying 1,500 organizers to reclaim the high ground in the economic debate and to organize workers into unions on a massive scale.

In launching the Fight for a Fair Economy (FFE), SEIU leaders declared that it wasn’t sufficient for unions to take on corporations one fight at a time.

Unions had to organize new workers into their ranks, not shop-by-shop, but on a massive scale. SEIU leaders talked about “the 7 percent problem,” referring to the percentage of private-sector American workers who belonged to unions. What was needed was “game-changers,” a return to the 1930s industrial organizing, one SEIU briefing paper read.

The Fight for a Fair Economy had two thrusts: First, through major mobilizations and actions, change the public national debate about what was wrong with the economy, expose corporate greed, and fight for better working conditions. And second, launch large-scale private-sector organizing campaigns to “move the union density dial” and rebuild durable union power.

Beginning with massive neighborhood canvasses that fed into protests outside banks and inside shareholders meetings, FFE blossomed in cities through the US in early 2011. Low wage retail, fast food, airport, healthcare, childcare, and other workers merged into this burgeoning, electrifying street movement.

In Seattle, FFE led to the Sea-Tac Airport workers organizing campaign (where I served as campaign director). In New York and other cities, FFE galvanized fast food workers around the call for “$15 and a union,” launching what became the national Fight for $15 campaign.

Seven years later we can say with confidence that the first goal of FFE has been accomplished, Trump notwithstanding. The mass protests and heroism of ordinary workers – marching, relating their stories in the media, staging walkouts, and committing civil disobedience at corporate shareholder meetings – forced the political establishment to pay attention to the crisis. Indeed, a share of the momentum behind Bernie Sanders’s insurgent presidential bid can be traced to the wage battles.

Seven years on as well, we can celebrate that more than 19 million low-wage workers in the US have won pay increases, millions more are poised to win raises in the next 24 months.

All good. But not nearly enough.

There’s another figure that matters: in the years since SEIU leaders declared a dire emergency and launched the Fight for a Fair Economy, private sector union density has continued to decline. The “7 percent problem” that SEIU leaders talked about with such urgency in the winter of 2011 had become, by 2017, a 6.5 percent problem.

What began as a bold vision to organize private sector workers and rebuild worker power has tapered for the most part into a tremendously exciting – yet limiting – campaign around wages. We’ve certainly changed the national discourse, but have not yet reversed the downward slide of unions.

In his essay “Assessing the Fight for Fifteen Movement from Chicago,” Steven Ashby properly notes that the successes ought to be measured not just by the tangible economic gains, but also by recognizing the burst of confidence as workers engaged in collective struggle, the indispensability of workers’ voices centered in the campaign, and the growing intersectionality of the Fight for $15 with #BlackLivesMatter and other social movements.

Unfortunately, though, like too many observers and participants in the Fight for $15 movement, Ashby fails to measure the movement by the goal it set for itself in 2011: to organize workers on an industrial basis into durable worker organizations; to build working-class power.

Along with Ashby, I’m excited that a movement that began with 200 New York City fast food workers in November 2012 has grown tremendously, with dozens of walkouts, about 1,000 civil disobedience arrests, 2,000 workers attending the 2016 Fight for $15 national convention, and perhaps upwards of 60,000 workers taking some sort of collective action. Great, inspiring progress to be sure, but engaging just a small fraction of the 3.8 million fast food workers in the US today.

The question for Fight for $15 – yet unanswered – is how to harness the energy of the walkouts to stoke a sustained movement of millions of workers.

There are promising experiments underway, such as New York City fast food workers coming together in Fast Food Justice, and app-based drivers fighting for bargaining rights. And the recent victory by grassroots activists in Ontario, Canada – not just a $15 minimum wage, but a raft of new organizing and workplace rights for millions of workers – offers a great example of leveraging the wage fight to build workplace and community power.

We also must measure the Fight for $15 goal against what working people actually need. There’s no doubt that the pay raises workers are winning are relieving soul-crushing poverty while building confidence in struggle. But the harsh truth is that $15 won’t solve our economic woes. It’s not even a living wage in many urban areas.

And it represents a pittance of what capital has stolen from the working class in recent years. The $62 billion in gains for low-wage workers in the Fight for $15 is paltry in comparison to $1.9 trillion in the just-enacted Trump tax cuts that benefit mostly the ultra-rich.

The labor movement – the collective power of workers – must claim a much higher ambition than tweaking the level of economic inequality in society. The Fight for $15 is transformational as long as it’s understood not as an end-goal, but rather as an on-ramp to a much greater struggle.

As we march, support, stand up and sit down with low-wage workers, we must continue to ask the tough questions, celebrate but not settle for wage victories alone, and maintain a laser focus on the worker power-building goal that was so clearly articulated in 2011.

Jonathan Rosenblum, “Fight for $15: Good Wins, but Where did the Focus on Organizing Go?,” Labor Studies Journal 2017.

Jonathan Rosenblum is a Seattle, WA-based union and community organizer and is a member of UAW 1981/National Writers Union.