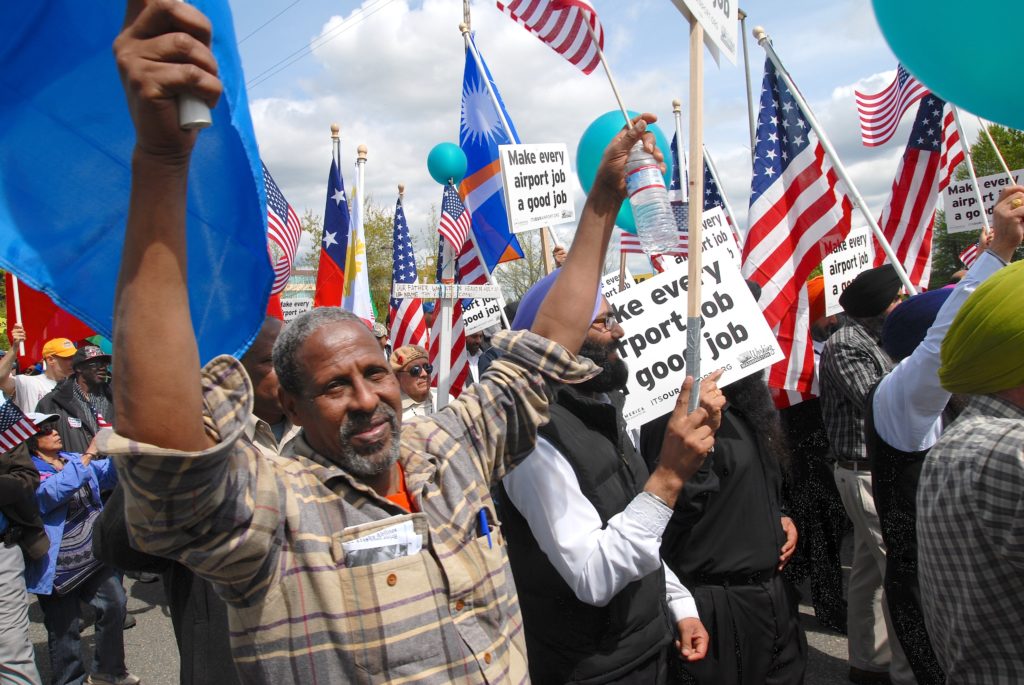 Steven Ashby is right to mark the achievements of the Fight for $15. As he reminds us, this national campaign brought wage increases to nearly 20 million American workers during a time when union density fell to below 7%. Equally important is the way in which the Fight for $15 forever redefined low wage work in the U.S.

Much like the occupy movement altered the discourse on inequality, I would argue that Fight for $15 forever changed how Americans think about low wage work

But by looking primarily at the tactics of Fight for $15, Ashby backgrounds an analysis of the larger strategy of the Fight for $15. The closest he comes is when he suggests that “The Fight for Fifteen goal is to create such bad publicity that a company like McDonalds chooses unionization to end the protest and to gain the positive publicity of the first food chain to treat its workers with respect.”

To date, the Fight for $15 had largely worked building symbolic power through one day strikes and media campaigns. They have been very successful in changing public perceptions of low wage work, and in the Gramscian sense of changing hearts and minds of Americans.

The Fight for $15 have very effectively used this symbolic power along with short-term coalitional power to affect change to wage laws and other employment standards. In the process they have realized the power that this “naming and shaming” around the poor wages and horrific working conditions of low wage workers has over progressive politicians and those striving to be considered progressive.

To date we have seen these changes in the most progressive state and municipalities. The question that remains for the Fight for $15 is how far can this movement expand beyond the low hanging fruit on both coasts?

We have also seen more than beginnings of a fight back in more conservative states passing preemption statutes preventing municipalities from setting local wages levels and other employment standards (National League of Cities, 2017). Funded by the Koch Brothers the American Legislative Exchange Council (ALEC) is spearheading preemption legislation across a large number of states.

Ashby is less interested in this political question, but focuses more on how to continue the Fight for $15 as a workers movement. Here I concur with Ashby that this will not be possible without massive support by labor and community-based organizations.

While this increased militant support is necessary, I am not convinced it will be sufficient as long as the strategy of the Fight for $15 remains only on symbolic power and the creation of bad publicity on a firm with 33,000 facilities, and 68 million customers in 111 countries. While Ashby refers to a decline in McDonald’s sales since the beginning of the Fight for $15, there are a number of factors affecting the fast food industry and their sales, and a causal argument can’t be made here.

And while McDonald officials have not taken the low road in terms of their rhetoric about wages and their worker, this is still a very long way away from the creation of jobs with dignity, respect and fair wages.

While the “naming and shamming” approach may have been successful against politicians I would argue that it will take real structural (economic) leverage to bring massive companies like McDonalds to heel. The success of the Flint strike that Ashby writes about was not just about the militancy of the workers, but that the union had targeted Fisher body plant 1&2 because they were the only facilities that manufacture body parts, and a strike there had a direct economic impact on the firm.

Bringing economic pressure against a firm like McDonalds is not simple but needs to be central to the strategy of the Fight for $15 moving forward. Given the size of the firm, both creative research and strategic thinking will be necessary to develop focused, targeted approaches, exploring secondary targets, the supply chain and a myriad of possibilities.

Building on their successful tomato campaign against Taco Bell, the Coalition of Immokallee Workers scored a victory against McDonalds. Paying a few cents more for tomatoes is very different from organizing McDonalds’ workers, but there is much to be learned from the campaign. And while the Fight for $15 has from the beginning rejected individual union elections, it may be time to focus resources and attention to organize a specific “union city” rather than to continue low level campaigns across the country.

Ashby, like Rolf and Rosenbaum argue that the Fight for $15 offers a model for a different kind of unionism. Both Rosenbaum and Rolf are very articulate and what this new model of union is not – a bureaucratic, slow moving instituted rooted in the post-war accord – but they are much less clear about what this new labor movement will look like.

Efforts at using symbolic power and short-term coalitions have been effective in impacting minimum wages but cannot by themselves be the basis of a new labor movement.

Ashby alludes to the IWW as a possibility for a new model of unionism. But 21st century mega firms like McDonald are fundamentally different from the local employers that the IWW organized in the later part of the 19th and early part of the 21st century, which sets real limits on what can be achieved workplace by workplace without a contact or larger institutional framework. As Steven Ashby has articulated, the important work on the ground by the Fight for $15 has built an important foundation for a new workers movement, but there is still much work to be done.

Tom Juravich is professor of labor studies and sociology at the University of Massachusetts, Amherst.