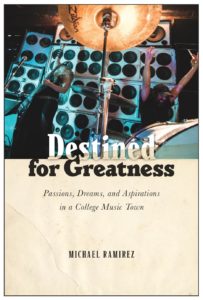 Have you ever wondered how some men and women muster the courage to pursue careers in rock music, despite the fact that so few of them will actually “make it”? Or have you questioned why some individuals would intentionally choose a path that will undoubtedly be filled with struggle, miniscule economic payoff, and a slim chance of success?

Sure, once musicians get to the level of fame of R.E.M., Nirvana, or The White Stripes, it all seems worth it. But what about the countless other musicians who don’t attain such levels of success? Why would they commit to such seemingly irrational choices? In my new book, I attempt to answer these and a host of related sociological questions.

I interviewed 48 independent rock musicians living in the iconic music town of Athens, Georgia to explore the life course pathways that shape their pursuit of musical careers as they enter adulthood. My analysis begins with a retrospective tracing of their formative years, particularly the time and context in which musical interests began developing.

The musicians discuss the extent to which the family, the education system, culture, and (somewhat ironically) religion sparked their interests in music in early childhood. Experiences within these institutions didn’t necessarily push them into music per se, but they did open the door for their considering it as an option in the future.

I then move into the adult years to analyze how musicians take more substantive steps into the music world. During the emerging adult years, many musicians can easily fit their musical interests into their “real” lives as young adults. However, things come to a shuddering change upon entering the early adult years (and particularly after the middle-class portion of my sample graduates college).

I find that one of the primary challenges is not the question of whether they will “make it” nor is it the economic struggle they face (though they do acknowledge both). The far bigger challenge is how to negotiate an appropriate adulthood in the context of musical careers in rock. The dual identities of an adult and a musician are not immediately reconcilable, but require musicians to craft both to fit alongside one another.

Though the musicians shared similar life course trajectories in many respects, there were clear gendered pathways that women and men differentially forged.

Women faced more challenges as they contemplated and moved forward with musical aspirations — in terms of the “imposter syndrome, issues of access, and the self-described late start they took into music. Men’s lives where not without their challenges, though they clearly worked from an advantaged position as they moved into the music culture.

The musicians I interviewed intend to continue with music, but they do imagine precisely what the future has in store for them both within and apart from music. Their anticipated futures are marked by gender, class, and their constructions of adulthood.

Regardless of their imagined futures, the musicians do see ways that their participation in music as having shaped their identities permanently. Some see themselves as having gained skills that may be transferable to more formal work sectors. Others are able to persist with music by reframing musical pursuits as no different from traditional careers in normative adulthood.

Contemporary cohorts of young people are routinely critiqued as not being fully adult and lacking the work ethic of previous generations. The musicians in my book strongly suggest otherwise — theirs is an arduous and painstaking craft. Furthermore, they exceed the historical criteria of adulthood in their day-to-day lives, even when those lives of focused on music.

The study of musicians and their careers is essentially a study of work. Who pursues informal careers in music and why? Like other career trajectories, the musicians’ life courses are marked by gender, race, social class, and the myriad ways those, among other, factors shape their access to the interior of the music world.

At the same time, their pursuit of informal careers in rock music, due to the absence of criteria or formal credentials for access, suggest there may theoretically be fewer barriers to embark on these careers in comparison to formal careers. However, my analysis shows otherwise — gender, class, family, culture, and norms of adulthood shape the aspirations of musicians, propelling some to move forward, while giving others pause as they imagine their futures.