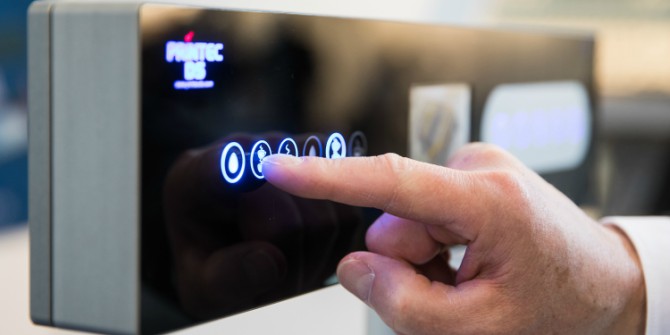 by Andreas Kornelakis and Dimitra Petrakaki

It is a commonplace that we live in the age of disruption. The latest trend towards digitalisation is set to accelerate changes in the workplace and transform the labour market perhaps irreversibly. Current debates on the digitalisation of work concern the extent and degree to which advanced technology such as robotics, artificial intelligence, machine learning and algorithmic decision-making could substitute for manual labour. More worryingly, this is considered to be a potentiality that affects not only the manufacturing industry but also the services sectors and impact on knowledge-intensive jobs.

But technological innovations do not only lead to the displacement of jobs, they also change the nature of jobs. This transpired in research that we carried out, which examined the complex interplay between work autonomy, technology and routinisation. We examined the cases of two healthcare organisations in England that implemented a new technology (Electronic Patient Record system). We found that the introduction of new technology standardises the work to a degree and constrains the autonomy of high-skill professionals (such as doctors and nurses), but also reallocates task discretion between occupational groups. More broadly, digitalisation may increase work autonomy for some occupational groups, but also standardise work and lead to monotonous and repetitive tasks for other groups.

Some commentators emphasise the perspective of digitalisation as a ‘blessing’. It is seen as one of the key drivers to boost competitiveness and productivity, allowing businesses to operate with minimum costs, whilst ensuring high performance and minimal product defects and human errors. A recent publication from Nesta also highlights that digitalisation and automation should not be demonised given their potential to lead to job creation and to a re-focusing on skills that are more humane such as emotional intelligence and inter-personal skills. Proponents of digitalisation often paint an optimistic view of new digital technologies, ignoring the potential negative disruption on working conditions and societal outcomes.

However, a recent paper by Frey and Osborne finds that technological change drives jobs and skills polarisation in the labour market; with growing inequality between high-income cognitive jobs and low-income manual occupations. Furthermore, the OECD acknowledges that the growing digitalisation of the labour market through the ‘platform economy’ raises questions about wages, labour rights and access to social protections for the workers involved, while it also creates problems of unemployment due to the inherent potential of technology to substitute work. This may also reinvigorate fears of social risks for a ‘race to bottom’ in wages and working conditions and a growing ‘precariat’ as an emerging global class with no financial security, job stability or prospect of career progression.