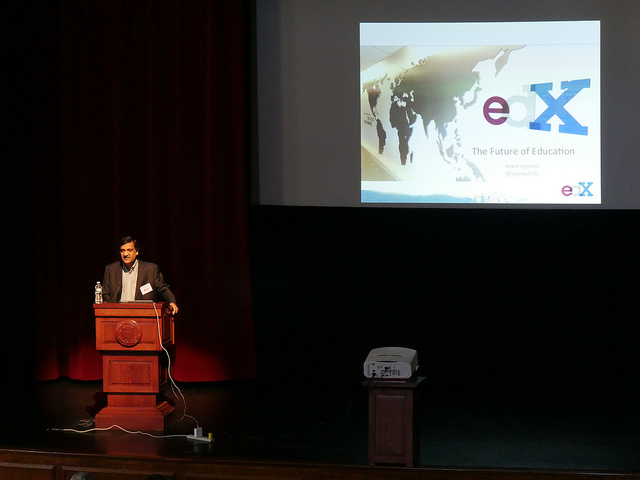 These days, the word “platform” is commonly used to refer to entities like Facebook, Twitter, or YouTube. These portals are sites of public discourse and see their role as connecting various sorts of publics: video producers to viewers, journalists to readers, or advertisers to potential consumers.

YouTube, for instance, started in 2005 as a Friendster-type social network portal that proclaimed, “Show off your favorite videos to the world”; by 2008, it had constructed itself into a “distribution platform for original content creators and advertisers, large and small.”

Recent work, both scholarly and popular, has spoken much to our discomfort that so much of public discourse now occurs on these privately-owned, for-profit, and unregulated platforms that lend themselves all too well to unique forms of harassment, invisible algorithmic manipulations, and sinister forms of corruption.

In a recently published ethnographic study, I found that the platform arrangement does much more than muddy the grounds between public and private, commercial and personal, work and play. It transforms the nature of work, the framing of organizational roles, as well as the construction of substantive expertise. From 2013 to 2015, I followed a non-profit start-up called edX through its stated mission of reinventing education by making Massive Open Online Courses. MOOCs caused a sensation in 2012 as three new start-ups (Udacity, Coursera and edX) leveraged the power of networked computing and collaborated with universities to offer prospective students anywhere in the world an interactive distance learning experience.

edX, like many start-ups, aspired to become a “platform.” However, it did not start as one, and more important, becoming a platform was not an inevitable development but a product of structured choices.

In its original conception, edX sought to partner collaboratively with instructors at partnering universities to produce tailor-made educational experiences for online learners. But, the need for a sustainable revenue framework made the platform model—in which designers engineer potential features in the form of multipurpose “tools,” which the instructors then use to produce the educational content autonomously and for their own goals and purposes—more appealing. The edX architects engineered this not just by building technical interfaces but also through a careful formatting of organizational roles: the instructor thus became a user of edX’s software (rather than a collaborator) while those at edX themselves became more like managers, building tools for learners, instructors, and researchers, and watching over these “users” to maximize innovation and revenue within the “ecosystem.”

Let me describe this shift in more detail. edX’s first employees saw it squarely as an educational institution. There were two main divisions in the edX organization: the engineers and the edX Fellows. The engineers worked on building the edX software while the Fellows interfaced between the engineering team and the instructors at partnering institutions.

In edX’s early job advertisements, the edX Fellow would have to “manage partnerships” with instructors at participating universities, have a disciplinary PhD, and an interest in “innovative pedagogies.” The edX management envisioned a whole host of Fellows who spanned the entire disciplinary spectrum (“social sciences, humanities, natural sciences, engineering, or education”).

An edX Fellow was thus a subject-matter expert (e.g. physics), a software expert, as well as a pedagogy expert. Fellows saw their overlapping job requirements as central to their professional identity. Robin, an edX Fellow, described his job to me “learning engineer”: a term he used to indicate his position on the boundary between pedagogy and software, and between academia and corporate life.

Ultimately, however, the edX architects chose to become a “platform.” edX would produce standardized software features that instructors at partnering institutions could use autonomously without any assistance from edX Fellows. edX could therefore expand the number of its partners so as to produce a large number of courses thereby increasing the possibility that some learners might pay a small fee to get a “verified certificate” (which in turn would allow edX, a non-profit, to become revenue-sustainable. The other approach would have been to produce only a small number of highly innovative courses with select partners and license them out for revenue. For various reasons, this was deemed unsuitable.)

The edX architects accomplished the transformation into a platform in two ways: by building technical interfaces and by formatting organizational roles. edX built a Graphical User Interface (GUI) called “Studio” that instructors would use to build courses with as little handholding as possible from the edX organization. Instead, partnering institutions were asked to support their instructors in any way they thought possible. Studio resembles the authoring interfaces of blogging platforms like WordPress, Blogger, and Drupal; it allows instructors to concentrate on the educational content and not worry about its presentation.

Studio thus configured instructors as creative users who generate user-generated content (such as video-makers on YouTube) as well as the innovative users who complement the software itself by building new things on top of it (such as iPhone app developers). In this, the framing of the edX software as a mere yet empowering “tool” played a key role. The category of “tool” (hand-in-hand with “user”) looms large within the history of software: it was through imagining computers and software as mere tools that computer pioneers transformed computers from symbols of the capitalist-bureaucratic complex into agents of self and social transformation.

The architects at edX also re-imagined their own roles as providing “tools” to empower their users (learners, instructors, researchers). As one edX employee put it, “we do software so that you can do education.”

The role of the edX Fellow, originally conceived as pedagogical, was re-conceptualized as managerial, with titles like “program manager” (PM) or “relationship manager.” These managers provided technical and best practices-type (but not pedagogical) support to instructional teams at edX’s partner institutions through documentation, seminars, conferences, phone meetings, virtual meet-ups, and so forth. Job advertisements for these positions no longer mention an interest in pedagogy. As the job definition changed, many of the original edX Fellows left, sometimes for partnering institutions where they could explore their original interest in pedagogy. Newer PMs often came to edX from careers in business consulting.

As the use of Studio became more and more established, an informal inequality started to develop among the now-formally equivalent instructors based on the degrees of support they were offered by their home institutions. At resource-rich sites (such as Harvard or MIT), instructors started to see themselves not just as teachers but also as innovators (of a certain Silicon Valley vein) who stretched the limits of the software. For instance, MIT instructional teams often thought of themselves as “learning engineers” (which was how edX Fellow Robin had described himself). An official MIT report defined “learning engineers” as experts “familiar with state-of-the-art educational technologies, from commercial software to open-source tools, and skilled in the effective use of new online tools.” This is, of course, the teacher incarnated in the image of a Silicon Valley information worker.

Why does this matter? Various scholars have argued that platform companies’ disproportionate power, compared to their users, means that they get to disproportionately influence politically salient categories e.g. what counts as “social” (liking something on Facebook) or “innovative” (designing software for copy-editing that draws on Mechanical Turk).

edX’s case illustrates one mechanism through which this happens: the construction of organizational roles. Consider the separation of software and pedagogy within the edX ecosystem. As edX expanded its slate of partners, its first clients and patrons, MIT and Harvard, saw a decline in their own ability to set the agenda and control the direction of the software. These “users” argue that the software has an implicit theory of pedagogy embedded in it, and that, as experts on pedagogy, they should have more of a say in shaping the software. While acknowledging this, edX’s architects counter that they—and not the Harvard-MIT folks—should have the final say on prioritizing which features to build, not only because they understand the software the best, but also because they see themselves as best placed to understand which features might benefit the whole eco-system rather than just particular players.

Consider finally the category of the “learning engineer.” MOOCs pioneers have been criticized because it is sometimes assumed—with reason—that their goal is to replace teachers with artificial intelligence. My fieldwork suggests that the focus is not so much on replacing teachers with machines as it is on turning pedagogical experts (e.g. instructors) into something resembling an “innovative” software worker of Silicon Valley. The platform arrangement, in other words, is a conduit through which Silicon Valley norms travel out into other worlds and through which software pioneers are attempting to remake the world.

Shreeharsh Kelkar, “Engineering a platform: The construction of interfaces, users, organizational roles, and the division of labor,” New Media and Society 2017.

Shreeharsh Kelkar is a Lecturer in Interdisciplinary Studies at the University of California, Berkeley. His book manuscript, “Platformizing Learning: MOOC Reformers and the Transformation of Educational Expertise,” investigates how technical reformers draw on knowledge practices from the software industry to reconfigure what it means to be an educational expert.