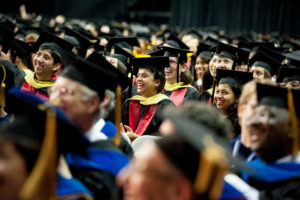 How segregated is doctoral education in the United States?

In a hypothetical education system with no field or prestige segregation, we might expect women to earn 46% of PhDs in each individual field and prestige group (e.g., top 5, 6th through 10th, unranked), given women constitute 46% of all PhDs in our data. In a hypothetical education system with field segregation but no prestige segregation, we’d expect women to earn the same percentage of PhDs in every prestige group, but the fields themselves to differ in their gender composition.

How well does the US measure up to these hypothetical scenarios? About 33% of women (or men) would need to receive PhDs degrees in a field dominated by the other gender to achieve field integration. Math-intensive fields tend to have lower shares of women PhDs than our 46% baseline, and verbal-intensive fields tend to have higher shares of women PhDs. In our data, about 65% of field segregation is associated with fields’ average math scores, but only 19% of field segregation is associated with fields’ average verbal scores.

Prestige segregation varies substantially across fields. Sociology has very little: for example, women earned 61% of PhDs granted by top 5 programs, the same as sociology as a whole. Economics, by contrast, is one of the most prestige-segregated fields: women earned 26.4% of PhDs from the top 5 programs, but 35.3% of PhDs from programs ranked below 30th and 32.6% of all Economics PhDs. Only about 15% of the differences across fields in the strength of prestige segregation is associated with average math GRE scores in that field.

It’s tempting to say that because prestige segregation is weaker than field segregation, it’s less consequential. However, prestige segregation is a form of “vertical segregation” in which men and women are found in positions that have different levels of a socially valued good. In this case, the “good” is not just prestige, but the resources that are correlated with program prestige: research support, funding packages for students, and so forth. Research also shows that the prestige of a student’s doctoral program is associated with her prospects of landing a tenure-track job, future promotions, and earnings.

Field segregation has a different character. To be sure, fields differ in their expected earnings, meaning that field segregation has a vertical component. However, fields also differ in their topic or approach to knowledge (“horizontal segregation”), even if they have similar expected earnings. There’s nothing inherently “better” or “worse” about Romance Studies compared to Art History, even if French professors or art historians beg to differ. And, a student’s choice of field typically reflects preferences formed well before applying to graduate school. Such horizontal segregation is arguably less problematic than vertical segregation, and it’s certainly less likely to be reduced through changes in graduate admissions or training practices.

Why are men and women segregated by program prestige?

Our data don’t allow us to evaluate explanations for prestige segregation. We can speculate, though, based on existing theory and empirical research.

One possibility is that advanced academic study is still culturally coded as “male-typed.” As is often true with male-typed tasks, women may judge themselves more harshly than men, and not apply to the highest-prestige programs at the same rate as men with similar qualifications on the assumption that they have little chance. Applications to graduate school cost $50-$75 each, and at elite programs even more, and rejection isn’t much fun.

Another possibility is that men are more likely than women to be admitted to high-prestige departments once they apply. Men are overrepresented among the very top scorers on the GRE, letters of recommendation tend to use gender-biased language, and male undergraduate research experiences tend to involve more frequent and intense contact with a faculty member.

To the extent that admissions committees in the highest-ranked programs select students on the basis of these easily observed markers of quality, women may not be as competitive for scarce slots in their PhD cohorts as men. And, members of admissions committees are no less affected by cultural biases than anyone else, and may hold women to a higher standard even if their files look very similar to men’s.

Middle- and lower-ranked programs also care about quality, of course, but they may put more effort into identifying “diamond in the rough” candidates who aren’t as likely to receive admissions offers from the very top programs. Middle-status programs may also not have the same leeway as highly ranked programs to simply ignore external pressure from their universities or from disciplinary watchdogs to diversify.

A third possibility is that female applicants are more attracted to, or attractive to, PhD programs where women make up comparatively high share of the faculty. This could be because of segregation by subfield – for example, women constitute about 55% of political scientists who study human rights but only 20% of those who study political methodology – combined with a lumpy distribution of subfields across programs. Or, female students may believe, perhaps accurately, that they will receive better mentoring from a female faculty member. This family of explanations implies that prestige segregation is reproduced across cohorts of students and faculty.

Finally, it’s possible that prestige segregation emerges during graduate training itself. Recent research shows few gender differences in attrition after adjusting for field of study, but this doesn’t rule out the possibility that women are more likely to drop out of elite programs within a field than men. We need more research to identify whether this, or any of these, potential explanations for prestige segregation is on the mark.

Lessons for scholars and administrators

Our analysis also offers clues for departments and administrators who want to diversify their faculty. In some fields, departments can increase the representation of women – and, we suspect, faculty of color – by looking beyond “departments from which we typically hire.” High-prestige PhD programs do not have a monopoly on talent.

Second, we need a system-wide effort to diversify PhD and undergraduate pipelines. We might gain some traction by enhancing, and extending to more fields, programs like the NSF’s Research Experiences for Undergraduates. Or, scholarly associations might create awards for departments that are especially good at training underrepresented groups. Prestige segregation may be hard to root out, but that’s not an excuse to ignore it.

Kim Weeden is Jan Rock Zubrow ’77 Professor of Social Sciences, Chair of the Department of Sociology, and Director of the Center for the Study of Inequality at Cornell University. Her collaborators on the published paper are Sarah Thébaud, Associate Professor of Sociology at the UC-Santa Barbara, and Dafna Gelbgiser, Research Scientist at Facebook.