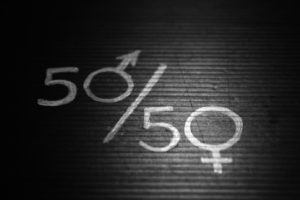 The gender wage gap in Germany is higher than in most other European countries and the U.S. In 2017, women in Germany earned about 21 percent less on average than men. Despite this, women compared to men usually report that their wages are more just.

This puzzling finding, also known as “the paradox of the contented female worker,” has been detected in several studies from the U.S. and other countries since the 1980s. An explanation for this paradox, however, has remained elusive.

Some scholars argue that the paradox is a product of inherent differences in how men and women experience and perceive wage inequality. Their argument is that men place more value on wages. In contrast, women are thought to consider other dimensions of work—such as work-life balance or a good working atmosphere—as more important than wages. Little in the way of empirical support for this differential job value hypothesis, however, has been offered.

Another possibility is that men and women draw on distinct referents or comparative standards when assessing the fairness of the compensation they receive. In support of this, some scholars who investigated the salience of pay referents have shown that others working in the same occupation and who are of the same gender are the most important referents for wage comparisons.

My research broadens this perspective by assuming that occupational gender segregation within the labor market constrains the availability of a preferred same-gender referent standard. The idea is that women in female-dominated occupations will mostly compare their earnings with those of other women and, thus, are less likely to detect gender wage inequality.

To test this, my analyses draw on the German Socio-Economic Panel (SOEP) for the years 2009 to 2015. The SOEP is, broadly speaking, the German version of the U.S. Panel Study of Income Dynamics (PSID). It was started in 1984 and is administered by the German Institute for Economic Research in Berlin. Every year about 20,000 people from more than 11,000 households are surveyed. Since 2009 employees are asked every other year what they would consider a just wage for their current position.

My sample includes over 16,500 different employees who answered the question on the wage they would consider as fair for themselves and that were surveyed up to four times between 2009 and 2015. The results of my analyses largely confirmed expectations surrounding the referents to which people make wage-fairness determinations and the role of segregation especially in shaping women’s and men’s interpretations of justice:

First, I detected a remarkable paradox of the female contented worker in these years, with women reporting their earnings as more just than men in comparable positions. Further analyses, however, revealed that only those women who worked in occupations with many other women considered their wages as more just. When the share of other women in an occupation was smaller, the paradox was no longer detectable.

To rule out the possibility that gender differentials were simply caused by the self-selection of more content women in female-dominated occupations, I went further and interrogated the longitudinal nature of the data. That respondents were surveyed up to four times between 2009 and 2015 allowed me to analyze if women’s wage-related justice perceptions changed as they moved from a non-male dominated occupation into a male-dominated occupation. The results of these analyses indicate that after such a move, women perceived their wages as more unjust than before.

Subsequent robustness checks revealed that the crucial threshold beyond which the paradox disappeared was a share of 50 percent or more male employees in an occupation. However, only about 20 percent of all women in Germany worked in such occupations. More concretely, this means that the paradox is still detectable among approximately 4 out of 5 working women in Germany.

One important lesson is that women do not somehow inherently differ from men when it comes to attitudes about wage inequality. Rather, the punchline is that women often work in occupations that constrain the detection of gender wage gaps. Scholars of distributive justice and attitudes on gender inequality should thus consider focusing more on the structural embeddedness of individuals to explain differences in attitudes.

Beyond providing a structural explanation for the paradox of the contented female worker, the results of my analyses offer another valuable insight on the topic of gender wage inequality: Gender wage gaps will not narrow as long as women consider lower wages as just or legitimate. With the ongoing decline of collective wage agreements, employees increasingly have to negotiate their own earnings. If women do not claim the same wages as men, the gender wage gap is likely to persist and in ways that seem legitimate.

One solution may lie in wage transparency. Wage transparency will likely foster awareness of gender wage inequality among women, including those who (given ongoing segregation patterns) mostly compare themselves to other women. In this regard, policy-makers in Germany have begun to recognize the potential impact of wage transparency on the gender pay gap.

A law was recently implemented that allows employees in companies with 200+ employees to request information on the average wages of those of the other gender and in similar positions. It will be interesting, both on the policy and research fronts, to see whether this extension of legal rights and transparency will narrow the gender pay gap over time and perhaps even eliminate the paradox of the contented female worker.

Peter Valet is an Assistant Professor (“Akademischer Rat”) at the University of Bamberg in Germany.