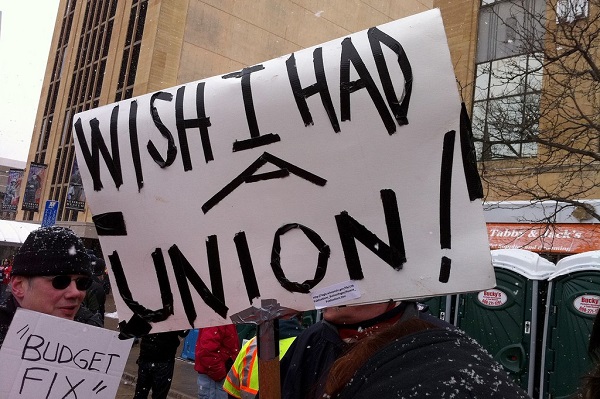 In the labor movement’s heyday during the 1950s, about one-third of American workers in the private sector belonged to a union. By the late 1970s, that fraction had fallen to roughly 1 in 5. Today, about 1 in 20 private sector workers belong to a union.

This level of unionization places the U.S. near the bottom among advanced democracies. In France, Sweden, and Denmark, over 80 percent of the total workforce is covered by union-negotiated agreements. Over half of the German workforce is covered, and Canada’s coverage rate is roughly double that of the U.S.

Because unions garner generally higher wages for their members – roughly 10 to 25 percent higher than for non-union members – their erosion has meant that workers who may have once belonged to one miss out on this premium.

Strong unions boost the wages of workers who don’t belong to one, too.

In a recent article, Jake Rosenfeld and I look at what the precipitous decline in unionization over recent decades has meant for non-union men and women who work in the private sector – representing the majority of the workforce.

If unions in the private sector were as strong today as they were in the late 1970s, we estimate that non-union men working full-time would earn over $3,000 more annually than they currently do. Full-time women would benefit, too, earning about $900 more per year.

The importance of strong unions doesn’t go away even when we account in our study for the decline in manufacturing, the threat of offshoring or automation, and the rising demand for skilled workers. And the union effect on non-union workers’ wages is large in occupations that are not susceptible to these processes, like construction and transportation.

Unions affect the wages of non-union members through economic, political, and cultural channels. Economically, where unions are strong, non-union employers could be compelled to offer wages on par with those at unionized establishments. If not, workers at nonunionized establishments might try to unionize or they might be attracted to the higher pay that often accompanies a union job.

Politically and culturally, strong unions establish formal and informal rules governing labor conditions, make the case for a “fairer share” for working men and women, and rally political support for labor-friendly policies. Indeed, minimum wages tend to be higher in more organized states compared to states where organized labor is weaker. Unions have been vocal supporters of recent various efforts to raise the minimum wage. For instance, the Service Employees International Union (SEIU) has spent tens of millions of dollars on the Fight for 15 movement, pressuring cities like Seattle and New York City to adopt a $15 per hour minimum wage and yielding pay raises for over 8 million workers.

Occupational segregation may weaken the power of unions

Why do men receive a union effect that is more than 3 times as large as it is for women? After all, the pathways through which unions boost the wages of non-union workers – whether those pathways operate through economic, political, or cultural channels – should apply to both men’s and women’s wages. When we look within occupations, a different story emerges.

In occupations like construction, transportation, and production – once highly organized jobs that are disproportionately held by men – both men and women enjoy substantial spillovers from a strong union presence. By contrast, in service occupations, where women are over-represented and unions have never had a strong foothold, the influence of unionization on non-union workers’ pay is much weaker among women and men alike.

So occupational segregation – that is, the fact that men and women work different kinds of jobs – is at least partly to blame for the larger boost in wages that private sector men appear to receive from strong unions compared to women.

The erosion of union membership has been linked to slower wage growth, rising inequality, and higher poverty. While recent legislation and court decisions have exacerbated organized labor’s decline, labor unions are fighting back. Successful campaigning on the part of unions has reminded the public that unions benefit their members and non-members alike. We saw this in Missouri when voters killed a 2018 “right to work” initiative by a ratio of 2-to-1.

Nationwide, a majority of Americans view labor unions favorably, and just over 50% believe the decline in union representation over the past several decades has been bad for workers. Others have pointed out fertile ground, especially among young people, for unions to bolster their ranks and strengthen their political power.

Even at the U.S. labor movement’s peak in the 1950s, most workers – about 2 in 3 – were not members of a union. In times when and places where unions are strong, these non-unionized workers see higher earnings alongside their unionized peers. The path to jumpstarting wage growth and reversing the growing inequality that characterizes the 21st-century economy may well run through a revitalized labor movement.

Patrick Denice is assistant professor in the Department of Sociology at Western University in Ontario, Canada.

The Production of Wealth Gaps between Whites, Blacks, and Hispanics