Employees in Europe have had the right to a voice in company decisions over jobs and working conditions for over 25 years. Since the introduction in 1989 of the Community Charter of the Fundamental Social Rights of Workers (the ‘Social Charter’), successive pieces of EU legislation have given employees the right to be informed and consulted by their employer over a variety of issues relating to their work life.

These rights are typically exercised through forms of workplace employee representation – either trade unions or consultative committees (sometimes referred to as ‘works councils’). However, despite the presence of a unified policy framework at the supra-national level, the prevalence of workplace employee representation varies greatly across the European Union (see below). Why is this?

Our recent research – based on data from over 25,000 workplaces across 31 EU Member States and candidate countries – shows that a combination of factors at national, sectoral and workplace level each help to explain why some employees have trade union or works council-type representation at their workplace and others do not. 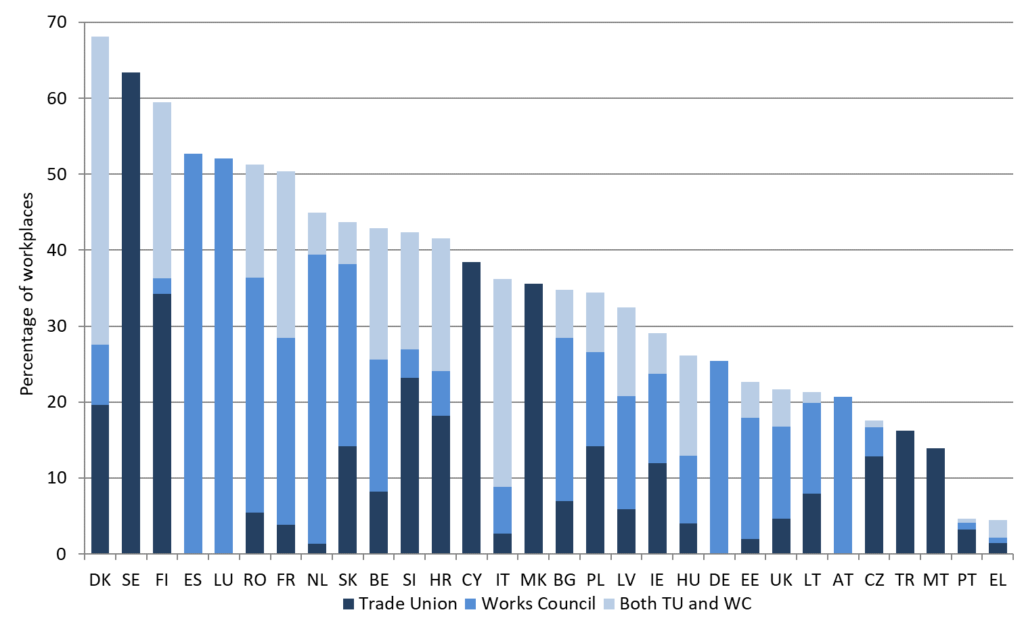 First, we show that national institutional factors matter a great deal in encouraging or discouraging the establishment of workplace-based structures for employee representation. Approximately one-fifth of all the variance between workplaces in the EU originates at the country level. We find that three factors are important here.

A second factor is the degree of centralization in the industrial relations regime. In countries where collective bargaining typically takes place at the national or sectoral level (e.g. Belgium or the Netherlands), the probability that a workplace has some formal structure for employee representation is 18 percentage points higher, on average, than it is in countries where bargaining typically takes place at company or workplace level (as in the UK).

In addition to country-level factors, there are also industry characteristics that prove relevant. An important one is the degree of product market competition. Greater competition in product markets increases the benefits to employers of avoiding forms of joint regulation which may raise costs (especially wage costs) and decreases the benefits to employees of establishing or maintaining mechanisms for collective bargaining. Accordingly, we find that workplaces in industries with higher price-cost margins are more likely to have trade union representation. There is no similar association with the presence of work council-type representation.

Finally, several single-country studies show that, within countries and industry sectors, workplace employee representation is more likely in larger workplaces (because it reduces transaction costs) and in state-owned workplaces (since many countries – though by no means all – encourage union membership among state employees). We find in our data that these stylized facts, demonstrated in studies of Britain, France and Germany, apply more broadly across the EU27.

There is thus a highly variegated pattern of workplace employee representation across Europe, arising from a combination of national, sectoral and workplace level factors. From a policy perspective, one might legitimately ask whether this is optimal? The answer depends very much on the policy objective.

If, for instance, worker representation is regarded as a public good, because it extends democracy into the working environment, one may seek to make it easier for employees to establish meaningful representative structures within their organizations. One means of doing this would be to extend the regulations around information and consultation to cover the smaller firms that are often excluded from the legal provisions. Another would be to make it easier for trade unions to gain bargaining rights within the workplace (though the current trend is in the opposite direction).

Policy-makers might, however, reasonably be concerned about the possible costs incurred by firms (and perhaps workers also) if worker representation were to be more heavily mandated across EU countries. There could be direct costs via information collection, provision and transmission; there could also be indirect costs associated with wage bargaining and, in some cases, through works council-type consultation and negotiation over non-wage matters. Some of these costs might be offset by productivity improvements that worker representation may bring. Nevertheless, such concerns might temper any enthusiasm for legislating in favor of more widespread worker representation.

One must also acknowledge that, although it is relatively easy for employees to trigger workplace representation in many EU countries, these structures are still not all-pervasive in those settings (see France for example). This raises a fundamental policy question: why is there such variance when the mechanisms to trigger representation seemingly make it easy for workers to do so?

Taking a closer look at emotional labor occupations: what are the health consequences for workers?