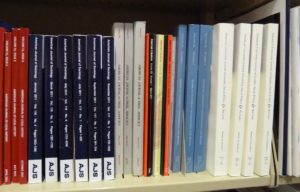 In research universities, assistant professors hired in tenure-track positions are typically given a certain number of years to publish and demonstrate research productivity. At the end of this period, the department and university evaluate the professor and decide whether to promote the professor and grant tenure. Tenure creates job security for the professor, and is a signal that they are widely recognized in their field as a prominent researcher. If the professor is denied tenure, they usually must leave the university and find a job elsewhere.

To study the explanations of the gender gap in tenure rates, I collected and combined detailed data from several sources: Google Scholar records, professors’ CVs, department websites, archives of webpages, and existing data on department context.

With these data sources, I assembled a dataset of over 1,500 professors who were in tenure-track positions in the early 2000s, at about 100 universities. The dataset tracks professors from the beginning of their academic careers and examines whether they were promoted to receive tenure or not. The study measures publications (type, amount, citation counts) and other types of research productivity, as well as indicators of department and school context. If a professor moved away from the school at which they began their career, I followed their early career paths at their new positions.

Does productivity or department context explain the gender gap in tenure?

I find that women are less likely than men to receive tenure in Sociology, Computer Science, and English departments in the approximately 100 research universities in the sample. For example, in Sociology departments, about 85% of men received tenure, compared to about 78% of women. In Computer Science, about 86% of men and 81% of women receive tenure, as do about 86% of men and 80% of women in English departments. These statistics consider whether professors in the sample received tenure at all; the gap widens somewhat (e.g., in Sociology 58% of men received tenure compared to 49% of women) if we just consider tenure outcomes for the original department in which professors began their careers.

This gender gap in tenure is partially accounted for by research productivity, but not completely.

Where do women and men end up after receiving tenure?

In addition to analyzing the gender gap in the likelihood of receiving tenure, I also examined what types of departments women and men who do receive tenure end up in. To study this, I use data on department prestige from the National Research Council, which ranks departments by prestige. This prestige scale ranges from 1 (the most prestigious) to about 100 (the least prestigious of the research universities in the sample).

What does this tell us about promotion and gender inequality?

Overall, this study finds that gender differences in productivity and workplace context only partially explains gender gaps in promotion to tenure and in the prestige of departments in which tenure is obtained.

What else could be causing the gender gap, if not productivity or context? In the article, I argue that several processes could be occurring to produce gender inequality in the tenure evaluation process. One explanation is overt gender bias: evaluators do not want women to receive tenure. Given past research on gender bias, I think this explanation is unlikely. Rather, more subtle processes can accumulate to produce inequalities in the tenure decision.

For example, women might be more closely scrutinized if they have children, and evaluators might unconsciously want to see additional evidence that mothers can remain productive – a scrutiny that they might not apply to fathers. Women professors might be less visible to other researchers: since tenure processes usually involve other professors’ recommendations, it is possible that there are gender differences in networks that could lead to different types of evaluators, or different ways that those writing recommendations write about women compared to men.

Women’s career decisions and preferences might play a role, too. Since the data from this study are based on observed career outcomes, I am unable to know whether professors chose to move to different types of schools because of work or family preferences – preferences that could be gendered. However, supplementary analyses examining school transitions and the likelihood of leaving academia pre-tenure suggest that there are few observable gender differences on these outcomes. This implies that women in the sample do not have dramatically different career preferences than men. Although it is possible that such preferences play a role, as far as I can tell from the available data, they do not seem to be driving the inequality we see.

Taken together, the results from this study suggests that gender inequality in the tenure evaluation process – likely operating through subtle or unconscious mechanisms – contributes to the gender gap in tenure in the three disciplines studied. Thus, if the goal is to get rid of the gender gap in tenure rates, it could be more fruitful to rethink evaluation processes than to focus on making women professors more productive.

Kate Weisshaar, “Publish and Perish? An Assessment of Gender Gaps in Promotion to Tenure in Academia,” Social Forces 2017.

Kate Weisshaar is an Assistant Professor in the Department of Sociology at the University of North Carolina at Chapel Hill.