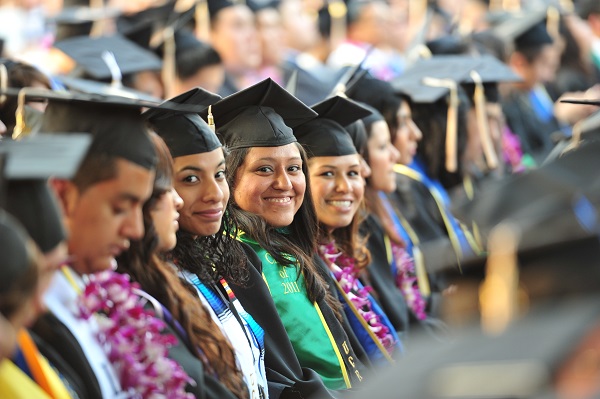 Every fall, a new crop of students enrolls in colleges across the country. Some pack up their belongings, leaving home and moving into dorms on campuses, while others start daily commutes.

And just as students’ paths to college vary, so do the campuses at which they arrive.

In recent work, I ask how some of these differences shape the college experiences of Latino students and find impact on their identity formation, civic engagement and more.

Though they are still underrepresented relative to the size of the overall Latino population nationally, Latino students constitute a larger share of the college student body than ever before. In 2012, their rates of college enrollment immediately following high school, exceeded the same rates for both white and black students (Excelencia 2015).

Latino students are also projected to have the largest growth—27%—in undergraduate education enrollment by 2022 (Excelencia 2015).

Thanks to these dramatic demographic shifts and projections, much has been written about the state of Latinos in higher education, garnering the attention of academics and policymakers alike. Like other students, Latinos enter college expecting to earn credentials but they leave with much more, including particular understandings of themselves, their futures, and the world.

In my book, Learning to be Latino, I compare Latino students’ experiences at three different colleges in California: an elite private liberal arts college, a public research university, and a regional public university. These colleges occupy different places in a stratified system of higher education, and vary in terms of their resources, status, and the types of students they serve.

I discovered that Latino students on each campus had a different way of determining who and what “counted” as Latino and what that identity meant. These differences resulted as students negotiated the unique institutional arrangements of their particular campus—arrangements that shaped how students interacted with one another, with the student body at large, with faculty and administrators, and even with the community beyond the campus gates.

On each campus, I found a distinct campus culture that shaped: 1) how students understood the barriers and opportunities for Latinos across the United States, and 2) how students organized for collective action, particularly when they chose to advocate for themselves as Latinos.

For example, Selena, a student at Liberal Arts College, explained, “I identify as Latina because it’s the most all-encompassing term. ‘Latino’ allows for panethnic identification and doesn’t distinguish between citizenship statuses. Someone in Argentina could be just as Latino as someone in Chicago. It allows for difference while retaining a cultural tie.”

Tania, a student at Research University, similarly identified as Latina but described it differently, saying, “I identify as Latina but I don’t fit all the characteristics, like I don’t speak Spanish and I haven’t eaten all the Latino foods.”

In contrast, Alex, a student at Regional Public University, rejected the Latino label completely, stating, “I identify as Mexican. I don’t like the word ‘Hispanic’ it is like recolonizing yourself. ‘Latino,’ I say, ‘what does that word mean?’ Latino means Latin. Mexicans are not Latins. Latino, it’s just a word to categorize us.”

The mediating factor shaping which students fell into which group? The particular campus context in which they were embedded. Each of these contexts has a particular racial climate, which is constructed by a range of factors including residential patterns, student body demographics, diversity programming, and how enclosed the campus is from the outside world.

In short, my research revealed that which college Latinos attend matters for how they come to see themselves as Latinos and what that means in the political and economic context of the United States.

As more and more Latino students enter higher education, research that examines how this experience varies across sites, and shapes how these students think about themselves and the world they live in, will only become more valuable.

It’s important to understand where these students come from—the vast majority are children of immigrants aspiring to become middle-class—and where they are going. With a college education, they are likely to become the next generation of Latino leaders. Furthermore, by studying these experiences, we gain more insight into higher education itself and why its implications are often so formative and far-reaching.

Daisy Reyes is an assistant professor in the Department of Sociology and El Instituto: The Institute of Latina/o, Caribbean, and Latin American Studies at the University of Connecticut.